From 21st to 25th September 2021, Women Human Rights Defenders Network Uganda (WHRDN-U), in partnership with Frontline defenders, conducted a workshop on visibility for protection of 21 WHRDS at Sky’s Hotel in Kampala. The specific objectives were to reflect on the multi-layered aspects of visibility and the protection methodologies for WHRDS.

During those five days, WHRDS discussed how visibility has affected their work, the gender specific threats, strategies to respond to those threats, and shared their experiences on the visibility for protection.

The first session of the workshop marked interventions from Marie San Martin, advocacy manager for Frontline Defenders. Marie explained what visibility means and its impact on the work of WHRDS noting that visibility is fundamental feature for WHRDS as it promotes their work. One participant shared that visibility has helped her take back her power as a woman defending rights of sex workers. She has set the pace for other sex workers to also speak out and defend their rights. Another participant noted that visibility is important for resource mobilization since donors are interested in seeing progress of their work. 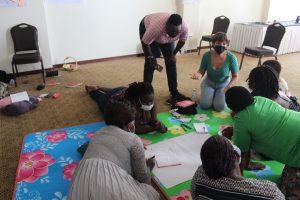 Marie San Martin leading a session during the visibility for protection workshop.

The second day led by Brenda Kugonza focused on identifying gender specific threats against WHRDS. She mentioned that threats such as, defamation, smear campaign, stigmatization and online violence are being used to harm their reputation. One of the participants mentioned that she has been named ‘a prostitute’ by the community. “Look at you, do you also have children? you don’t deserve them, you are only a prostitute’’- she expressed. 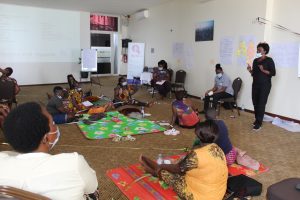 Brenda Kugonza facilitating on gender-specific threats during the workshop. 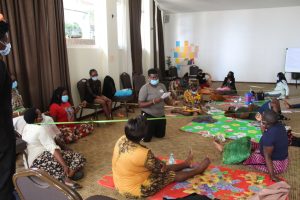 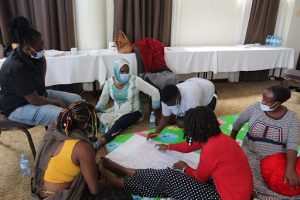 Participants drawing action plans on how they will protect their visibility.

The fourth day focused on digital security management and the intervention of internet.  Sandra Kwikiriza, the Executive Director at Her Internet, told participants that there is a need for them to tighten their digital and physical security. She encouraged WHRDS to use the following digital safety tips

The fifth day marked the end of the workshop with a session on online violence by Hellen. She highlighted the new forms of violence including sexual harassment, cyber stalking and hate speech, mentioning that they are frequently terrifying and have manifested to physical violence. She enabled group discussions where participants identified the following digital security tips; 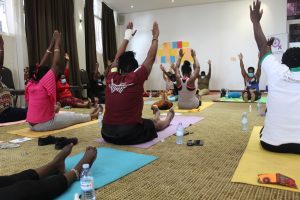 During the workshop, participants hard a self-care and wellbeing session.