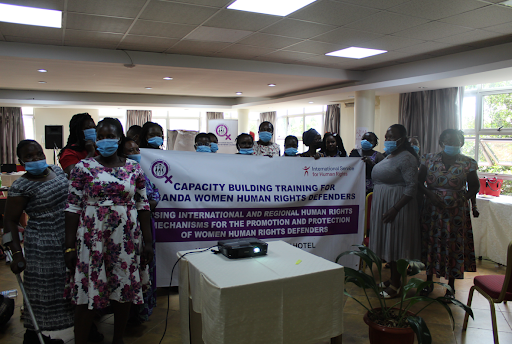 The workshop aimed at equipping WHRDS with skills on relevant human rights protection mechanisms and mapping out opportunities for advocacy. It was also an opportunity to foster coordination and networking among members.

Brenda Kugonza, the Executive Director for WHRDN-U began the workshop with highlights on the role of the network as an umbrella that was formed to protect women who defend the rights of others. She emphasized that the network came together to respond to specific individual or collective cases of violation of rights of WHRDs at risk. 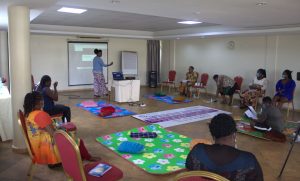 Brenda facilitating during the training

Hannah Sobocinski, the training and advocacy manager for ISHR briefed participants on human rights mechanisms at international and regional level which defenders can collaborate with. These included the Human Rights Council, the Universal Periodic Review, the Special Procedures and independent experts, and the treaty bodies.

Pooja Patel, the programs director of ISHR also led a session on the human rights mechanism. She described The United Nations’ Convention on the Elimination of all forms of Discrimination against Women (CEDAW) as the international bill of rights for women in civil, political, economic, social, and cultural fields whose role is to set up an agenda for national action to end discrimination against women.

With the support from the discussions, WHRDS recognized I need to advocate for the implementation of advocacy objectives to engage with international mechanisms.  They recommended the following objectives; 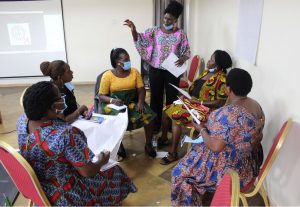 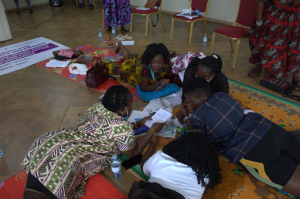 Participants discussing the advocacy objectives to engage with key stakeholders.

They also mapped out key stakeholders to influence and a time frame. Facilitators advised that it was vital for them to look beyond the human rights defenders’ bill, and that they should not be limited by time as issues of WHRDS are worrying and therefore requires urgent action. 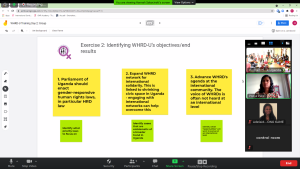