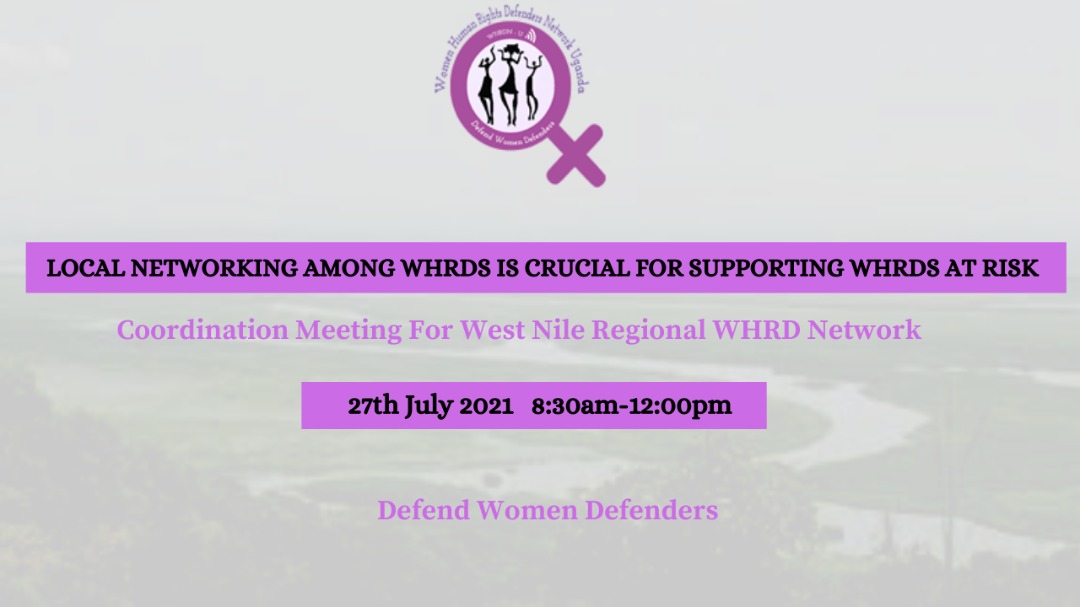 Over 9 women from Zombo, Arua, Nebbi and Adjumani districts convened in their physical locations and attended an online meeting organized by Women Human Rights Defenders Network Uganda (WHRDNU) on 27th July 2021 from 8:30am to 12pm. The theme of the meeting was “Local Networking among WHRDs is crucial for supporting WHRDs at risk.” The meeting focused on the importance of local networking in West Nile region.

In her remarks, Ms. Brenda Kugonza of the WHRDN-U welcomed members and thanked them for advocating for peace, justice and equality in the region. She further noted that WHRDs in West Nile work tirelessly to defend women, girls, land, economic and freedom of expression rights while also fighting against gender-based violence, discrimination and widow inheritance.

However, Ms. Brenda Kugonza noted that as WHRDs defend human rights, secretariat has received reports of the challenges WHRDs face such as hostility, harassment, verbal and sexual assault by state and non-state actors and that the ongoing violations can result in damaging their physical, emotional and energy levels.

The following comments from participants illustrate the current situation of the threats faced by WHRDs based in West Nile:

Ms. Brenda Kugonza from WHRDNU called upon the women defenders to practice self-care and healing from time to time. She noted human rights work can take a toll on their mental health and they shouldn’t reach a point of breaking down before they take a break.

The women defenders were encouraged to get each other’s contacts so that they can be able to check up on each other as well as stand with women defenders at risk. Phone contacts were shared and exchanged by members during the meeting.

Members suggested having an active WhatsApp group to ease coordination and networking in the region. Building good relationships with stakeholders like the police. Maintaining and having a positive attitude when they go out to do human rights work. These were recommendations raised to help members overcome the challenges women defenders face.

Participants attending the zoom meeting in their physical locations. 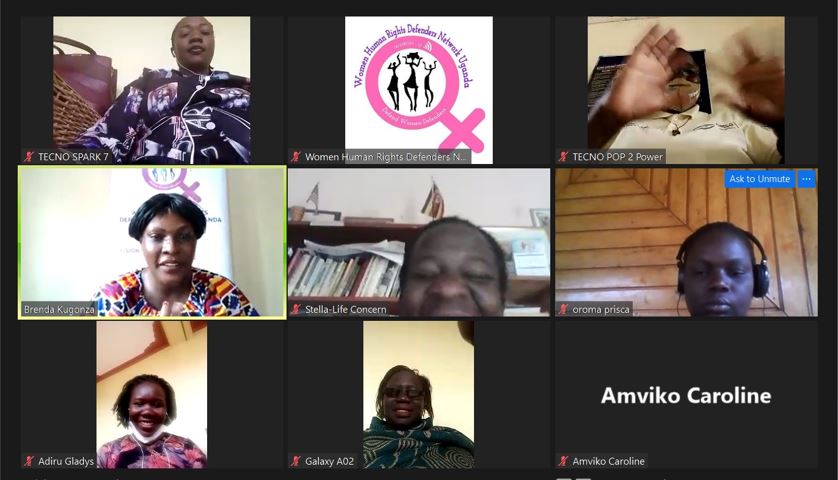 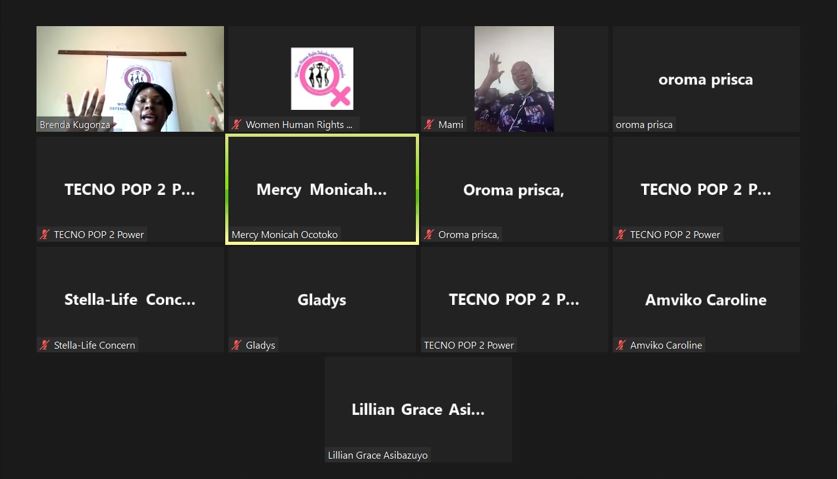 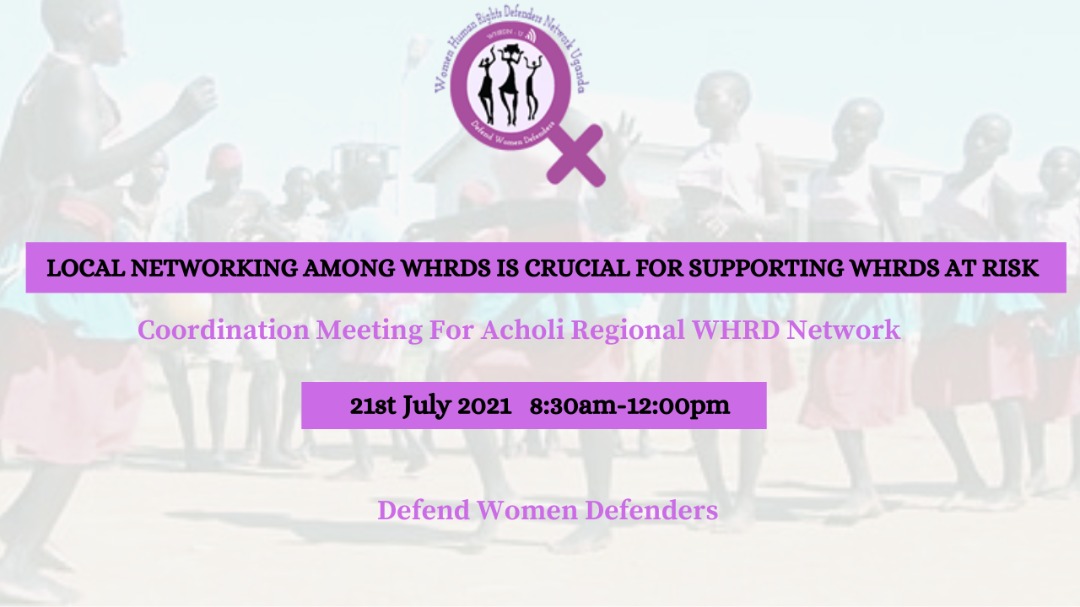 Over eight WHRDs from Gulu, Kitgum, Omoro and Pader districts, participated in a virtual meeting for the Acholi WHRD regional network. The meeting on 21st July 2021 from 8:30am to 12pm was under theme “Local Networking among WHRDs is crucial for supporting WHRDs at risk”. The women defenders gathered in their physical locations and joined the meeting online.

Speaking to the participants, Ms. Brenda Kugonza of Women Human Rights Defenders Network Uganda (WHRDNU) thanked them for the work of defending rights. She informed members how despite the COVID-19 crisis, they continued to fight against child marriages, GBV/FGM, widow inheritance, land grabbing and defending rights of LGBTQ persons and sex workers.

Ms. Brenda Kugonza also told members that reports received at secretariat from WHRDs in the region reveal that WHRDs continue to suffer from smear campaigns, eviction from their communities, being accused of promoting immorality and being assaulted physically on several occasions. That also lack of recognition of their human rights work since in their communities’ women activists are perceived as bad women, not being good wives, failure to attend to issues in the private sphere (their homes).

Participants also acknowledged the existence of social and traditional norms in the region that have posed grave obstacles for women defenders since it is unheard of for a woman to actively participate in public spaces. For instance Christine Achan from Gulu district was rejected by her community and forced to relocate. ‘’ I have been beaten on several occasions and recently I was being evicted from the house I was in and WHRDNU came in and supported me to relocate to another place, she told members. ‘’Threatening calls and messages, exposing nude pictures are the experiences we go through in handling our roles as Human rights defenders and sometimes it’s discouraging,’’ shared Agenorwot Fiona from Gulu district. 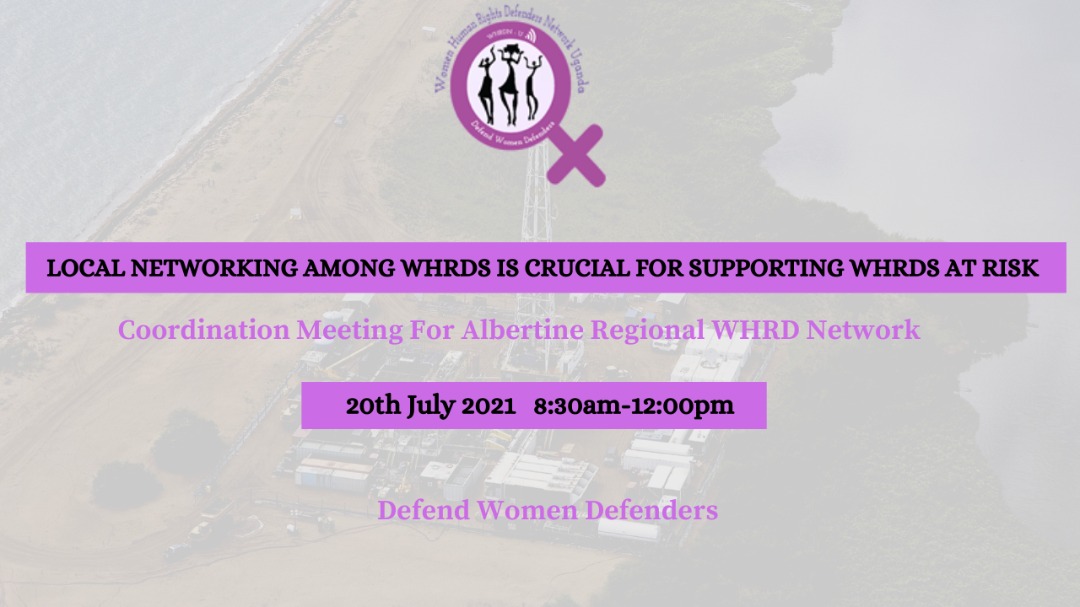 On 20th July 2021, 18 Women human rights defenders from Albertine (Kagadi, Hoima, Bulisa and Masindi districts) region were in attendance of a zoom meeting hosted by Women Human Rights Defenders Network Uganda (WHRDNU).  Under the theme “Local Networking among WHRDs is crucial for supporting WHRDs at risk’’. The meeting was organized to foster a strong local network in the Albertine region to promote rapid response to cases as a team.

Ms. Brenda Kugonza of the WHRDN-U, commended the good work of WHRDs, she informed members that WHRDs in the regions are involved in various work of defending human rights including; land rights, women’s rights, mining rights, and minority rights.

Ms. Brenda Kugonza, in her remarks, noted that the purpose of the meeting was to facilitate dialogue among women defenders to create a local support system for them. It was also to build capacity to respond to cases at local level. She urged members to offer guidance, solutions or suggestions on how to strengthen joint action to ensure WHRDs are safe and protected.

Ms. Brenda during the meeting expressed concerns of fears, attacks and threats against women defenders emphasizing that over time, the WHRDNU secretariat documented the following challenges, risks and threats among WHRDs in the region:

In the plenary discussions, participants shared their experience of fears below;

Among the suggestions brought forth to curb these challenges experienced by WHRDs were;

Members are seen participating in the zoom meeting below;