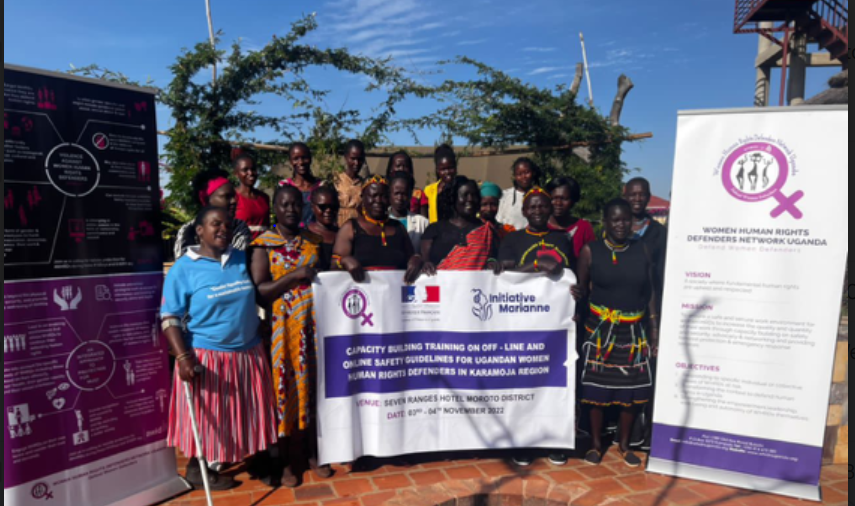 In November 2021, UN-WOMEN, UNOHCR (United Human Rights Office of The High Commissioner) and the WHRDN-U (Women Human Rights Defenders Network Uganda), published and launched safety guidelines for WHRDs titled “Our Voices, Our Power: Online and Offline Safety and Security guidelines for Women Human Rights Defenders in Uganda”. The report also called for urgent measures to deal with challenges facing WHRDs including equipping WHRDs with capacities and skills to mitigate the impact of online and offline attacks.

Upon this background, WHRDNU with support from the French Embassy of Uganda, conducted workshop to 20 WHRDs from Karamoja region. The training was conducted on 3rd and 4th November,2022, at Seven ranges hotel, in Moroto district. The two day activity was organized to strengthen the capacity of WHRDs and mitigate the impact of online and offline attacks against WHRDs,  provide knowledge on preventing and mitigating gender-based attacks, criminalization of their work, as well as physical and personal security management, offer practical strategies for enhancing WHRD’s safety online & offline as well as provide WHRDS with basic safety tools for WHRDs in preventing and responding to attacks against them.

Ms. Brenda Kugonza of the WHRDN-U started by appreciating the French Embassy in Uganda noting that without their financial support, the training would not have happened. She thanked WHRDs for the good work they do to defend rights in Karamoja region and welcomed them to the training. Brenda then gave details on the objectives of training. She said that training workshop is to increase the knowledge and skills of the participants and their organizations the in relation to off-line and on-line safety guidelines. It would facilitate the spread of information, skills, and culture to prevent and respond to attacks, threats and risks both on-line and off-line by WHRDs. Training workshop was an opportunity to strengthen the capacity of Karamoja WHRDs because they had participated in developing the guidelines during a workshop that was conducted by UNWOMEN, UNOHCHR and WHRDN-U . 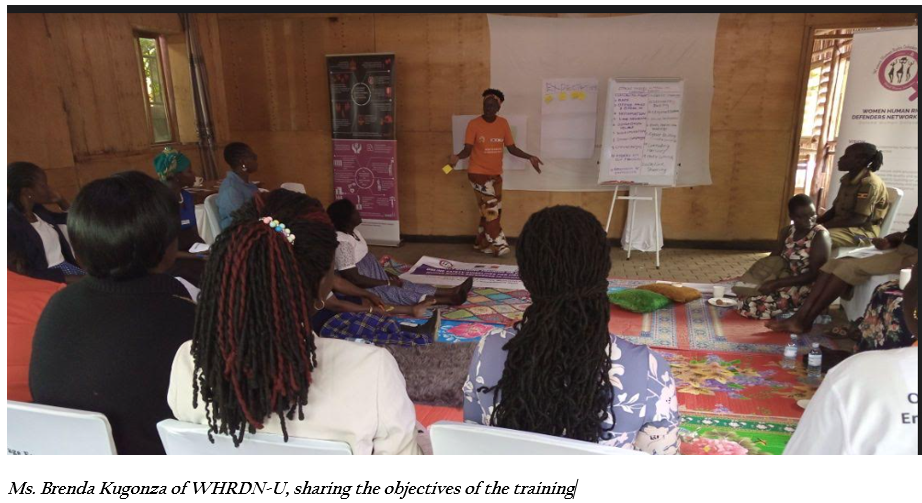 Remarks from the district representative

Ms. Betty Nakiru, a female police officer working with Moroto District Child and Family Protection Unit, in her remarks appreciated the WHRDN-U for supporting the work of WHRDS in Karamoja region.  She urged participants to report to police when attacked for supporting girls and women the community. If also us the police women are attacked for supporting survivors of domestic violence and what about you. she noted that if women defenders are attacked, then the marginalized people suffer. She ended her remarks by urging them to get her contacts.

Joan Namulondo of WHRDN-U, employed the role play methodology f in this session to further help participants understand the concepts. Four (4) scenarios (See below) were role played by participants to identify the online and offline, attacks, and gender-based attacks faced by WHRDs in their region. Reflections and learnings scenarios included: 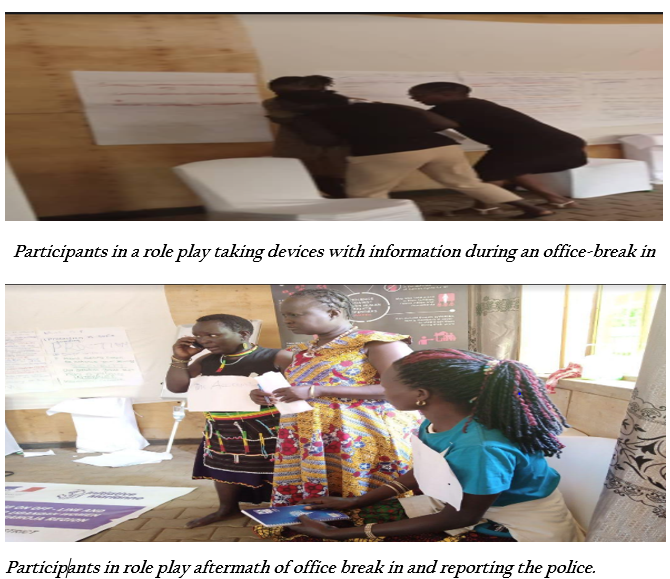 The purpose of the session was to learn about Digital and Online Security Management. The learnings were imparted when participants mentioned that digital security in relation to smart phones, mobile phones, internet café, phones, cameras, modems, flash discs, emails, watsapp, Facebook, Twitter, Instagram, Tiktok etc. Through a brain storming session, participants learnt some basic computer security measures such as to install antivirus to protect their computers from malware and hackers, to create and maintain secure passwords, have strong different passwords for different services and phone security measures such as the safest mobile phone is a cheap, unregistered, don’t save sensitive information on your phone, make sure all your information is deleted on your mobile before selling it or having it repaired, destroy unusable phones and old sim cards before discarding them. 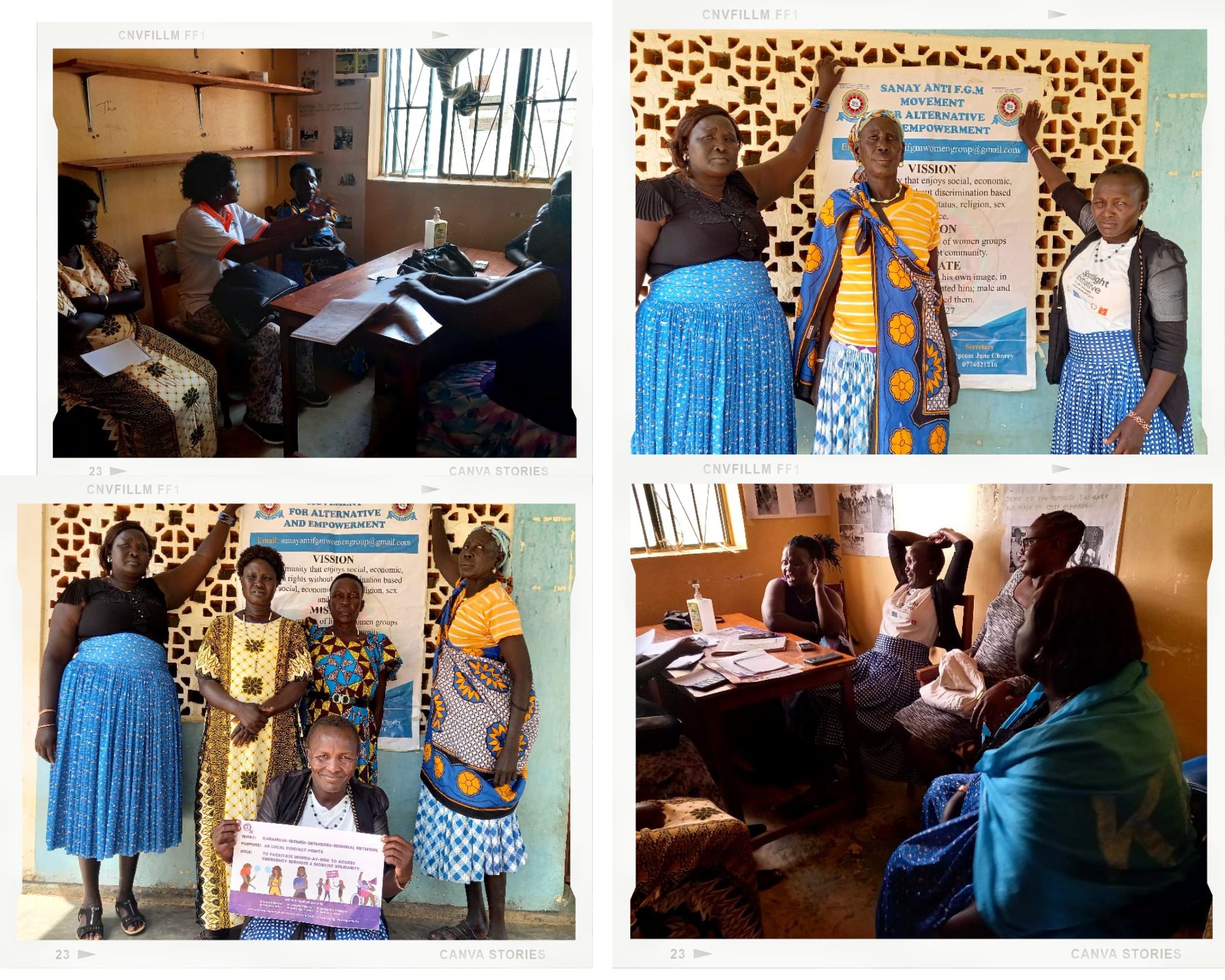 Ms. Paulina Chepar, is the Chairperson of Sanay Anti-FGM Movement, in Amudat district. This movement is a community based organization made up of women groups that defend rights of women and girls, supporting FGM survivors and Women, and promoting women’s economic empowerment. Due to their work of fighting FGM, GBV, early marriages etc.  SANAY members usually suffer attacks, threats of killing, arrests and assaults.

Paulina told the WHRDN-U team that one of the important achievement is ‘the way we engaged community surgeons (traditional –women-cutters of girls) ,trained  them and raised awareness about the dangers of FGM. I am proud of one Rebecca Lotukomoi  -a community surgeon  in Cheporoi community, who was a very well-known expert  and respected for cutting girls, with our activism work , Rebecca stopped the practice of cutting girls, Rebeca mobilized other cutters, together they formed a group known as  former surgeons called  Sinjolol group of ( 15 defenders) to start the campaign  to end FGM”…SANAY movement, has created partnerships with various NGOs, UN and managed to influence communities to fight FGM through her community sensitization efforts “ I feel happy my because my work has managed to influence surgeons to form groups, said Paulina Chepar.

Impact of the threats and risks to WHRDs

According to Chepar Paulina, Given the hostile context, our children, parents, constantly worry about our work.

Sagal Paulina: We have additional pressure as defenders affecting their mental wellbeing and activism work. It is too much for us in a context of this crisis ,no funds, dealing with rape cases, FGM, working on difficult issues of famine, locust, rape,COVIP-19,. Tell me how you  won’t  forget about you wellness and risk your  mental wellbeing- We care so much for others and who is there to care for us in all these difficulties. In fact we don’t sleep because in night you are thinking of solutions to help people whose rights have been violated.

Joyce Alungat explained “ Because of doing my GBV work, family planning awareness, providing shelter to girls resisting FGM, referral GBV survivors to access services at the Police, Health center , NGOs, etc. I have been targeted through body shaming and damaging my reputation. They tell me you woman with big ass you are the one spreading HIV, you are Chepkartayan (meaning you are a prostitute), gathering children for prostitution. I have been told I am a bad mother, very immoral, publically shaming me. Sometimes you lack support and solidarity.