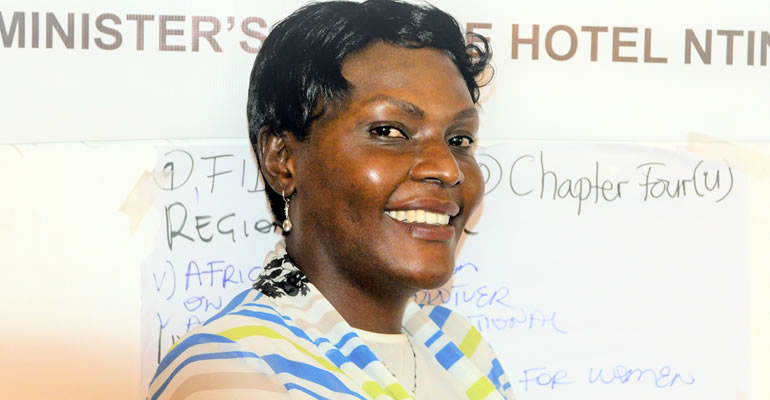 Question: Brenda thank you for sharing your experiences with us. Could you tell us more about yourself, and your work as a human rights defender?

Answer: I am from Uganda and I am a feminist. I have done a lot of work in promoting women’s rights and gender equality. My experience cuts across mobilizing communities to prevent domestic violence, and carrying out national policy advocacy campaigns on women’s rights issues. I spearheaded a coalition of more than 25 civil society organizations in Uganda to campaign for a law on domestic violence and I am glad that the law was finally passed. In other words, thanks to this campaign, Uganda has a law on domestic violence. I have also been involved in promoting women’s social and economic rights and worked with the Forum for African Women Educationist to educate and support girls to stay in school, especially at the university level. While working for the Council for Economic Empowerment of Women in Africa, Uganda Chapter, I was part of the team that promoted women’s economic empowerment by engaging microfinance institutions to mainstream gender in project financing. My experience as an expert in gender analysis, gender mainstreaming, gender-based violence and advocacy makes me a passionate promoter and defender of women’s human rights.

Question: You sound so passionate and assured about this role. Has it all been a bed of roses?

Answer: Because I grew up facing injustices as a girl, I am driven by the passion to change things. Otherwise, looking at the challenges, I would have given up. That is to say, the challenges are enormous, especially given the patriarchal nature of our society. In such a system where society promotes male supremacy and female subordination, the issues of the power imbalance between men and women become a serious problem, so much so that where ever you go, you have to face it, being constantly reminded that as a woman you are expected to stay in your subordinate position.

Question: Can you give us some examples of women you have succeeded to convince in joining you in this course?

Answer: It will interest you to know that I started working specifically on the protection of WHRDs besides the regular promotion and protection work I do. The reason is that as a WHRD, you are labelled as an activist, a person who is promoting foreign values, a person who is tearing families apart etc. You face isolation, discrimination and threats and even people close to you tell you such things as “hey Brenda, why can’t you stop this kind of negative activism?”. Some of us have been blackmailed, defamed and have faced a lot of hostility. However, WHRDs have been doing a lot of positive and important work, and within our network, we have been providing counselling, legal support, we have looked after orphans and vulnerable children, supported widows, victims of GBV, just to mention a few. Some of us are involved in promoting civil and political rights of women. However, as women, doing such things as promoting land rights, engaging in anti-corruption campaigns, civic education etc. attracts many bottlenecks by way of restrictions on how we mobilize, organize and engage. Community members, religious leaders, government officials, the wider public, and the media have yet to fully incorporate the notion of women standing up for human rights. WHRDs are in essence serving the community and protecting so many people from human rights violations. However, to many people, this is a no go area for women. For this reason, it has taken me so much time to get women involved in human rights promotion and protection to understand that they are WHRDs. I am happy that despite the stereotypes society places on this kind of work, the WHRD Network Uganda (WHRDNU) has grown enormously in a very short time.

Question: What concretely are some of these challenges and how are you mitigating them?

Answer: WHRDs have faced arrests for holding peaceful demonstrations, their offices have been broken into and equipment destroyed, many have faced defamation in public and others have experienced restrictions for sharing information through publications and radio programmes. This was what triggered the discussion in 2015 on creating the WHRDNU. I am happy to say that after the launch of the Network in 2018, we already have 52 WHRDs from different organizations and geographic areas around the country engaging and harnessing strategies to not only promote human rights but also to protect those who work tirelessly and fearlessly to promote human rights. In the recent past, we have referred cases concerning WHRD to existing protection mechanisms, and some of the victims have received relocation, counselling, psycho-social and other support, such as replacement of destroyed office equipment. We have also provided WHRDs with tools on security management. We have established sub-regional human rights defenders network to address the challenges we face, and to support WHRDs whose stories we rarely hear, but who are doing some incredible work in the rural areas with limited means and at times no access to information. These networks exist in Karamoja, Acholi and Albertine regions. It is worth noting that some WHRDs who have faced attacks are those denouncing the activities of mining companies, and speaking out against the violation of rights of indigenous peoples. This also includes journalists who because of their investigative reports have faced enormous challenges.

Question: There has been a lot of talk about International Women’s Day and how it is marked in Africa. What would you say is the added value of this day to women’s human rights?

Answer: We must recognize the international nature of this day and think beyond what the local cultures and traditions hold, or the way some people have made this day to seem. It remains an initiative to pay attention to women as full human beings, so I strongly think that the day has its value: It is a global day of advocacy for women’s rights. If unfortunately this is forgotten at times in the general debate and activities organized, I think it remains an opportunity to look at key issues such as maternal health, girl child education and dropouts rates because of lack of sanitary pads etc. What about the situation of women who are the poorest amongst the poor? Thinking about women’s day to me is thinking of how we as a nation are fulfilling the rights of women. This to me is the main discourse as far as the day is concerned and it should involve everyone, not only women. It is not a day when, as I hear many say men are going to do the cooking. I think that is all but a joke meant to undermine the important role women should play in society. It should not be a day to amplify the gender roles for women.

Question: What is your opinion about WHRDs? If you were given the opportunity, considering your experiences, is there anything you would do differently today?

Answer: WHRDs have trained and mentored women and men at all levels to understand women’s rights. It is because of this that WHRDs through their work have been able to create a movement of male allies. It is important that both work together to improve the protection of human rights in general and women’s human rights in particular. Regarding what I would do differently if I had the opportunity and the resources, one thing that would change this whole system that creates injustice and discrimination, especially against women and girls, would be to start talking about women’s rights in schools and to do so from the very early stages. Had we started this long ago, the story would be different. I remember when I was in school, it was the widely held belief that the head of the family is a man. Moreover, even when you are living with a single mother and you say the head of your family is your mother; you will earn yourself across. Education on women’s rights starting from basic education would greatly change the notion and understanding people have about women’s rights. Having said that, I still think that despite the odds, WHRDs have achieved a lot. Patriarchy has been there for many years, it is deeply rooted and whatever we do, wherever we go, we will be fighting with power-related issues. Despite this, it is not time to give up. Our results are enough to inspire us to keep going.
Source : https://uganda.ohchr.org/Story/Details/18