15 female journalists from across Uganda were trained on the protection measures at a workshop organized by Women Human Rights Defenders Network Uganda (WHRDN-U) on 15th/01/2022 at Arch Apartments in Kampala.

The workshop aimed at raising the visibility on violations faced by female youth defenders, share best practices for the protection and encouraging solidarity among female journalists.

The workshop was facilitated by Ms. Amviko Sarah, a journalist at Radio Pacis in Arua district and Ms. Kyomukama Edwig from WHRDN-U kicked off with an energizing session called “The river of life”. Edwig told participants that being a female journalist working as frontline defenders is a journey which she related to that of a river. “There is a point when the river is high, calm or under pressure, it is finds huddles, hitting the walls. You even hear people say “Leero Omugga Gutabusse” but finally the river finds a way.” She explained.

Reflecting on her work, Christine Kyampaire, one of the participants shared her journey that she started her career well until when she begun to face challenges from duty bearers and politicians but with the solidarity from fellow journalists, she sustained. Kasigwa Rose also shared her journey of journalism started with a lot of vigor and energy, however along the way she encountered challenges like less pay. Because of her efforts, she got recognized and put on payroll.

Edwig Kyomukama leading a session on the river of life.

Rose Kasigwa (on the right, in a yellow T-shirt) and Christine Kyampaire (on the left) sharing their journey as defenders.

While facilitating on the violations faced by WHRDS, Sarah Amviko explained to the participants that female journalists face risks and attacks similar to those of their male counterparts, but encounter additional risks and attacks such as sexual harassment, non-recognition, marginalization, body shaming, and sexuality baiting among others. These threats and attacks are imposed to them based on their sexuality, gender stereotypes and cultural norms.

Sarah added that, in some societies, women are often reduced to their roles as mothers, daughters and caregivers rather than seen as legitimate political and economic actors in all spheres of society. Female journalists are regarded as ‘bad mothers, difficult women, loud/rumor mongers, or prostitutes.’ She emphasized that although they face these risks, there is a need always to speak out so that people can understand these challenges in order to be protected. Participants also revealed that they faced some of these risks.

I was threatened by the community after reporting a story about mismanagement of hospital ambulances in Arua district. They sent threatening messages like; ‘We know you, we know where you stay, We are coming for you’. Said Sangi Mara from Next media.

When I got a husband, he told me to leave journalism work and he starts a business for me. Said Kajumba Goretti.

During COVID 19, I was the only journalist permitted to move freely, So I could leave work late, one day I was about to be raped. I called my bosses and informed them but they did not care, I couldn’t quit my job because I needed it. Said Masika Joy.

My fellow female journalist lost her job after she had taken her maternity leave. As soon as she left, a male journalist was recruited. Said Ajok Flavia. 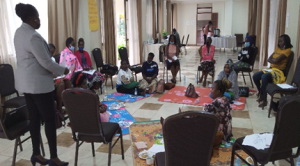 The workshop also involved a session on selfcare and wellness where Edwig Kyomukama led participants into the 30 days selfcare challenge that involved what they must do to get relief and enjoy their activism work. She emphasized the importance of selfcare saying that, human rights work is challenging and many defenders have continued to work in a trauma-based environment, violent, and fatigue. She encouraged them to take on this challenge in order get relief from stress that is likely to come along with journalism work.

Ms. Asingwire Bonitah from WHRDN-U also encouraged female journalists to seek support by reporting cases of violence to the secretariat. “If we don’t report we won’t be supported”. She encouraged participants to always call WHRDN-U helpline when they face gender-based attacks. She further took participants through how to fill in the incident forms.

By the end of the workshop, female journalists got inspired and recognized risks, attacks, and the need to take care of themselves before others. They also promised to recommend at least two members to the secretariat and reach out to their colleagues in case they are attacked.