On 12/01/2022, Women Human Rights Defenders Network Uganda (WHRDN-U) organized a workshop for 15 indigenous women defenders from the Batwa, IK and Bennet communities at Arch apartments in Kampala, who continue to face prejudice, discrimination, torture and sexual violence because of their struggle to defend their rights, and ancestral land.

The workshop aimed at raising the visibility on the risks and attacks faced by Women Human Rights Defenders (WHRDS), share best practices for the protection and encouraging solidarity among WHRDS.

The workshop began with a reflection on a journey of being a defender led by Ms. Asingwire Bonita from WHRDN-U, which she termed as the “River of life” where WHRDS shared challenges and achievements they have faced. Viola, a WHRD from Kaboong shared how the Bennet lived in peace until the government started evicting them from their land, which prompted her to become a defender. “The work of being a defender came with pressure from the government but that didn’t stop me from fighting. Through lobbying and advocacy, the government recognized our work and gave us another land for settlement and from then things stated moving on smoothly.”-She added.

While leading a session on the risks and attacks, Ms. Sange Jackline, shared some of the threats minority WHRDS face. “We the Batwa, IK, Bennet and the pastoralists have lived in territories rich in natural resources for example our forests. So, we have all the time refused people to grabbing our resources and to endanger our traditional livelihoods. We are defending our rights, lands, culture and our children.”– She explained. Sange emphasized that although they face these risks, there is a need  always to speak out so that people can understand challenges minority WHRDS face because safety is crucial for them. 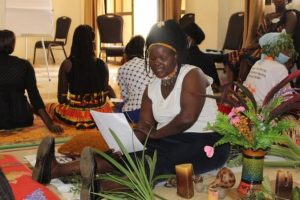 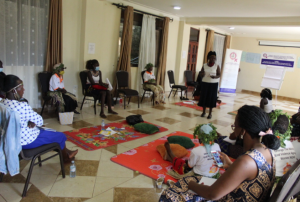 The session enabled participants  also to share some of the experiences they faced. Ms. Edreda Digolo shared that, while fighting for their ancestral land, they face stigma from community members calling them “the landless.” Ms. Mbatina Grace added that Batwa women do not get medical attention from health workers when they go to hospitals for treatment and as a result, many pregnant mothers have died while giving birth. Gloria from the IK shared that IK students have been nicknamed “Ndorobos” literally meaning the minority by the Sabiny’s students at university.

Through group discussion, participants were tasked to identify the advocacy opportunities in their community and the best practices to protect. The IK women defenders presented that, being in space of fellow WHRDS, documenting and reporting cases to WHRDN-U, networking and coordinating with top securities would be their best practices to ensure their protection. For the Batwa, coordination with Uganda Wildlife Authority Park reserves officials and solidarity with WHRDS under attacks would be their best protection measures while the Bennet presented that, networking with CBOS and local councilors’ and registering their organization was their best practice for protection. 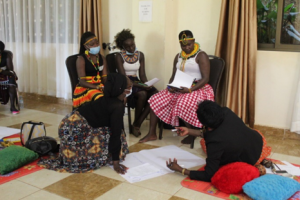 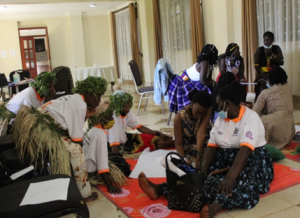 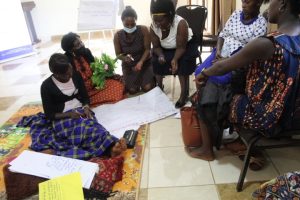 The workshop ended with a selfcare session where Sange Jackline told participants why selfcare is important saying that, human rights work is challenging in a way that many WHRDS spend so much time working on complex issues and forget to take care of themselves. She further told participants that when they don’t take care of themselves well, they will start to feel so tired, and give up. She mentioned these while leading them into a 30-day selfcare challenges that involved what WHRDS must do to get relief and enjoy their work. 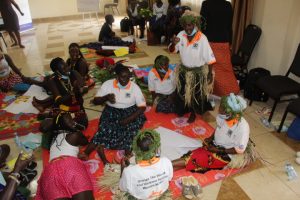 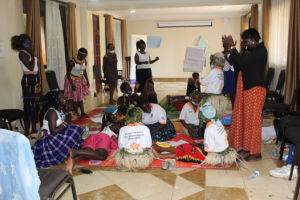 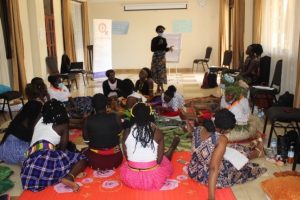 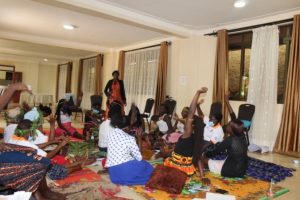 The IK, Bennet and Batwa women defenders interacting after a selfcare session.

By the end of this session, WHRDS got inspired and recognized risks, attacks, and threats as serious to their lives and activism work. The Batwa committed to creating  bonfire areas that they named as “matidya mbakaswa” where they would come together to protect and take care of their community. They stated that they will use these meetings to talk about problems, and exchange ideas about solving them. IK revealed that they will, identify activities for cohesion, women empowerment and local advocacy. The Benet WHRDS committed  to create a safe space for protection in case a defender is intimidated. WHRDN-U gave them a flower as a symbol for safe space.