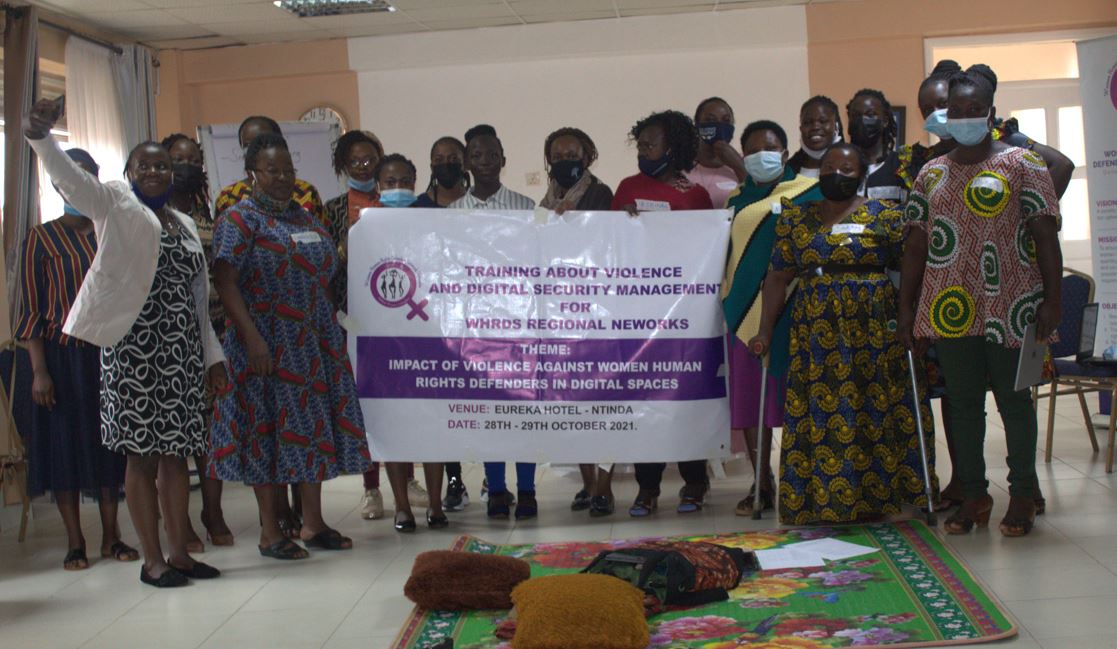 20 district focal persons from Karamoja, Albertine, Rwenzori, West Nile, and Acholi regions of Uganda acquired skills on online gender-based violence and digital security management as a mean to protect themselves against online gender threats in their work. This was during a two-day training, organized by Women Human Rights Defenders Network Uganda (WHRDN-U) at Eureka hotel in Ntinda, on 28th to 29th October 2021.

While leading a session on digital security management, Ms. Kwikiriza Sandra, encouraged participants to prioritize their safety through using practical tips such as;

Ms Kwikiriza demonstrated how the internet operates. “When one sends a message to another person through a device, it passes through internet service provider 1(ISP1) like Airtel or MTN who then connects to the WhatsApp or website then back to Internet Service Provider 2(ISP 2) where the message is being sent.’’

Ms. Amuge Peace, while facilitating on online gender-based violence advised participants to be aware of digital hackers and stay vigilant when using internet. She explained that the misuse of digital tools has opened doors to new forms of abuse such as cyber bullying, defamation, doxing and sexual harassment. This has caused distress, trauma, and depression to victims including WHRDS.

Ms. Asubazuyo Gertrude, a WHRD from Albertine region shared that, “News came from one of my WhatsApp groups of a man who was found beating his wife in the market accusing her of not staying home to cook. When I condemned this act, people abused me in comments saying that this matter does not concern me. Another person commented, ‘no wonder you are not married’’.

Ms. Lopuka Mary, a WHRD from Karamoja region revealed that, she got shocked when together with her colleagues reached at work in the morning and opened their computers only to find a pornography movie.

Participants were encouraged to transfer knowledge on online gender-based violence and digital security skills to colleagues in their respective organizations. In our tweet here, Ms. Sange Jackeline, a WHRD from Kween district, Eastern region trained two of her colleagues in the Benet Community.