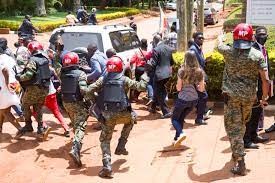 On 17th February 2021, WHRDNU learnt of the physical abuse that Irene Abalo of Daily Monitor and Josephine Namakumbi of NBS TV both journalists faced in the line of duty. They were capturing former Presidential Candidate Robert Kyagulanyi’s walk to deliver his petition on Human Rights Violations committed by the government to the offices of United Nations Human Rights Council (UNHRC) in Kololo.

They were blocked and chased away by  Military Police officials who also beat them until they could not walk or run. Irene Abalo was pulled by a police officer and one of her ankles hit three times causing it to swell. Whereas Josephine Namakumbi received heavy beatings of a baton on her back until she was forced to kneel down on the ground.

One of the police officers who assaulted them was quoted saying, “Stand up and run, we shall finish all of you.” It was hard for them to have been denied access to the premises of the UNHRC Offices but to also assault them physically was beyond the line.

The WHRDNU paid a solidarity visit to both of them in their homes to make sure that they were receiving medical attention and that they feel and remain encouraged fighting for the right to justice and information. They however expressed fear for their lives and loss of their jobs if they tried to report their cases to Police since it is the same police that was the perpetrator. Lists of referral services were given to them to help them get justice.

The WHRDNU is committed to Supporting accessing to support and emergency services for women defenders at risk for healing and self-care including accompaniments such as legal, medical, psycho- social support and temporary relocation services.