On 19th/01/2022, Women Human Rights Defenders Network Uganda (WHRDN-U) held a workshop at Arch Apartments for 15 land, environmental, oil and extractives WHRDS who despite of their significant role in defending land rights and resources have continued to face violations and attacks from the society because of their work.

The workshop aimed at raising the visibility on the threats faced by land, environmental, oil and extractives WHRDS, share best practices for the protection and encouraging solidarity in their work.

Ms. Asigwire Bonita from WHRDN-U told participants that human rights defenders work is a journey which she related to that of a river. “There is a point when the river is high, calm or under pressure, it is finds huddles, hitting the walls. You even hear people say “Leero Omugga Gutabusse” but finally the river finds away.” She mentioned these while leading a session on understanding the life of being a defender which she called “the River of Life”.

While reflecting on their work, some of the participants share that; “I started as a defender fighting GBV in Kasese district, Things got intense when the men started threatening me saying that I should leave their families alone. I later started defending the rights of women in the mining sector. The community accused me of seeking for public recognition. In the course of my work, women in mining realized that I was doing right and they supported me.” Halima Nasaka.

“Our house and land was grabbed, we were helpless and had no one to fight for us, when I grew up, I chose to defend the rights of the people whose land has been grabbed. One day, a woman was thrown out of the house with her seven children, I reported their case to police. Her husband, threatened to kill me for interfering in their matters. However, I kept on advocating the the woman’s rights until she got equal share with the husband.” Amina Shahir.

Bonita Asigwire leading a session on river of life.

Ms. Rukanya Beatrice a WHRD from Hoima district facilitated a session on risks and attacks land, environmental, oils and extractives WHRDS face. She shared that, women defending land, environment and resources are often excluded from land ownership, community negotiations and decisions about the future of their lands. When they engage in activism, they are often criticized for neglecting their domestic duties and endangering their families.

In addition she stated that, in some cases, perpetrators deliberately target women in communities as a strategy of intimidation and fear. Some WHRDs of APPA land conflict in Acholi sub regions were killed & arrested criminal charges for her work in defending land and environmental rights. Women Human Rights Defenders (WHRDs) confronting extractive industries in Uganda are regularly harassed and threatened. They face violence, intimidation and threats and also members of their families. She emphasized that although they face these risks, there is a need always to speak out so that people can understand these challenges in order to be protected.

Gladys Oyenboth, one of the participants shared that she was threated to be raped and killed when she defended a mother of 8 children to attain equal shares with from her ex husband in Bullisa. She called journalists who wrote a story about that saga, she is scared of her life and her family members.

Mawa Jackline also expressed that because she defends women to access their property, society has misconceptions that women should not own properties for example land. This has made her human rights work hard. 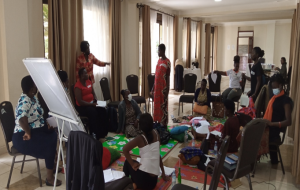 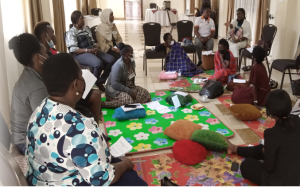 Gladys Oyenboth (on the right) and Mawa Jackeline (on the left) sharing their lived experiences on the risks and attacks they have faced.

Ms. Rukanya Beatrice further encouraged participants that amidst their challenges and threats that come along with their work, WHRDS need to take care of themselves. She said these while leading participants into a 30 days selfcare challenge that involved what they must do to get relief and enjoy their activism work. She emphasized the importance of selfcare saying that, human rights work is challenging and many defenders have continued to work in a trauma-based environment, violent, and fatigue. She encouraged them to take on this challenge in order get relief from stress.

Ms. Asingwire Bonita also called upon participants to seek support when they are attacked by reporting cases to the secretariat. “If we don’t report we won’t be supported”. She encouraged participants to always call WHRDN-U helpline when they face gender-based attacks. She further took participants through how to fill in the incident forms.

By the end of the workshop, female journalists got inspired and recognized risks, attacks, and the need to take care of themselves before others. They also promised to recommend at least two members to the secretariat and reach out to their colleagues in case they are attacked. 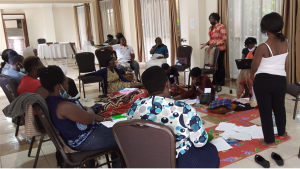 Bonita taking participants through how to fill in the incident forms.